Published by the SF Bike Coalition Blog on October 10, 2013. This article was written by Mary Lauran Hall, Alliance for Biking & Walking. 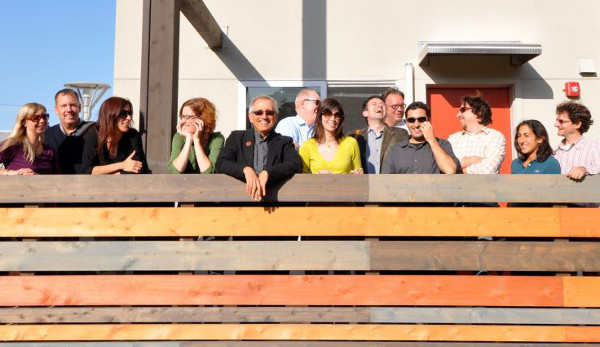 David Baker with his staff in San Francisco.

David Baker, founder and principal at David Baker + Partners Architects, was dubbed “a starchitect for the common man” for his firm’s work designing green buildings and innovative housing complexes.

But he said his motivation for supporting a new protected bike lane along San Francisco’s Second Street is, in part, “purely selfish: I’d like to have my employees safe on the way to work.”

Citing a recent tragedy in which a young woman was struck by a truck while pedaling in an unprotected bike lane, Baker noted that three-quarters of his 22-person firm bikes to work at least some of the time. A protected bike lane outside the office would help ensure that his employees get to and from the office safely, he said, and have more enjoyable riding experiences en route.

But Baker is also thinking about his own bottom line. As a veteran in Bay Area real estate and development, he’s been around long enough to see that wide streets with fast-moving car traffic tend to depress property values, while buildings on streets with new bicycle facilities and pedestrian improvements have actually appreciated.

“I own the office. I know that if we had protected bike lanes out there, it will improve my property value,” he said. “World class bike networks can’t come soon enough.”

This post is part of a collaboration between the Green Lane Project and the Alliance for Biking and Walking to document the ways better bike lanes are building prosperity around the United States. For more excerpts and the full report later this month, you can follow us on Twitter or Facebook sign up for weekly emails of our latest news here.

And we’re adding one more picture to the presentation,The Oak Street Bike Lane at Baker Street. Fully separated and it has the green pavement. This is the idea we are trying to implement on 17th Street between Church and Sanchez Streets. Our lane would be a two way bike corridor and would have to  be stronger at the entrance to avoid cars using it as a pull up drop off ramp.

This is a a blog established for sharing letters, replies, assorted documents and pictures related to the effort to end the bike-muni track bloodbath on 17th Street.
Loading Comments...
Comment
×
%d bloggers like this: