No on J & K this November – Taxing the homeless for cars

First let’s explain the two propositions which the San Francisco Board of Supervisors have placed on the ballot for consideration by the voters in the November 8th, 2016 general election. J is a budgeting measure dictating that the City set aside a certain amount of money from the general budget every year for homeless programs and transportation programs. K is a sales tax of .75 cents that will generate money for the general fund for the next 25 years.

The measures are not linked. If K passes but J fails then the sales tax is still collected it just doesn’t go to those programs. And if J passes but the sales tax measure  (Prop K) fails, then the Mayor can just cancel Prop J citing the lack of funding.

The Mayor and San Francisco Board of Supervisors have placed on the November 2016 ballot Proposition J, which creates a fund for Homelessness and Transportation. If approved, Proposition J would direct additional funds to critical transit services and transportation improvements in every neighborhood, including safer, well-maintained streets, transit maintenance and expansion, and Muni equity and affordability programs. It would also fund priorities that received little or no funding from 2014 Proposition A and Proposition B, such as repaving our streets, and new BART and Muni cars.

A separate measure, Proposition K, would raise the city’s general sales tax by 0.75%. Proposition K would generate roughly the same amount of funding in new annual revenues as is identified in Proposition J for Transportation ($100M) and Homelessness programs ($50M).

Both Proposition J and K require a simple majority of voters to approve them in November 2016 in order for them to take effect. — SF County Transportation Authority.

Why do we oppose these ballot measures?

Trust. We have seen the way the City spends money in recent years and we don’t think giving the City more money will solve anything right now. They say the money is for homeless people and MUNI but it will go to private automobile infrastructure, BART cars for downtown commuters and new buildings for Mercy Housing.

The City will squander the cash on the biggest capitol projects imaginable concentrating the benefits on a tiny part of the city like the Central Subway or downtown in general. And they want to make homeless people pay for these programs complete with $200 dollar an hour city employees every time they buy a bottle of water or a fresh pair of socks. Regressive taxes are bad. Set asides are bad budgeting.

Let’s take a look at where the County Transportation Authority says the money set aside by Prop J goes. They made a little chart. Check out the new age rhetoric. What the hell do these categories specifically mean? We will translate for you.

A quick read of the measure itself and we came up with close to 70% of the sales tax dollars will be spent on private automobile support of various sorts. 9% is for funding “studies” that say their pet projects are the best ideas ever and that we should selloff the train and bus yards to politically connected housing developers. That leaves about 21% still in play for public transit but that also has to cover that new fleet of BART cars that somehow got slipped into this San Francisco funded initiative. 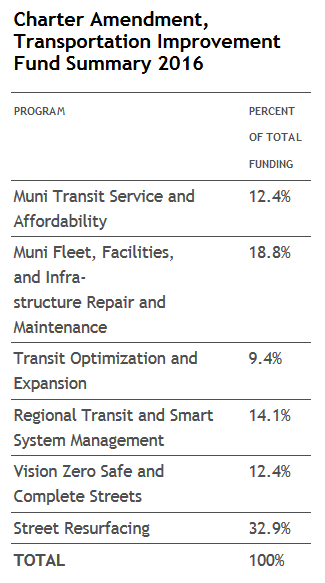 We are going to keep this short but there is one item in measure J that needs to be looked at critically. Measure J is divided into two parts, the first deals totally with homelessness and the second is exclusive to transportation. But both sections have a clause that says the Mayor can cancel that part of the measure within two months of it’s passage by voters if he sees fit. This means that Mayor Lee could cancel both sections of measure J (objecting to set asides for example) and we would be left with a general sales tax increase. That would make measure J the lipstick on the pig (measure K).

Here’s the language that caught our eyes, you decide what you think.

That’s our quick analysis of these two measures. We think they are a thinly veiled slush fund. Let’s see what a few others think.

Lets see what SaveMUNI.org has to say:

A regressive sales tax is counterproductive.  Prop K uses the widely felt desire to aid the  homeless to divert funds from cash-strapped city services to one city agency—which we have already given billions of dollars in sales taxes, bonds, fares, fees and fines.  For any one of the following reasons, Vote No on Prop K: