John Entwistle reporting on September 1, 2016 from the Castro in San Francisco.

The original destination and indeed the birthplace of the Historic Streetcar revival was the Castro. It was at 17th & Castro Streets where the first ride was driven by then Mayor Dianne Feinstein with festival founder Rick Laubscher and assorted dignitaries at her side. The original collection of historic streetcars was made road worthy in the David Pharr Yard behind Safeway right here at Church and Market Streets. 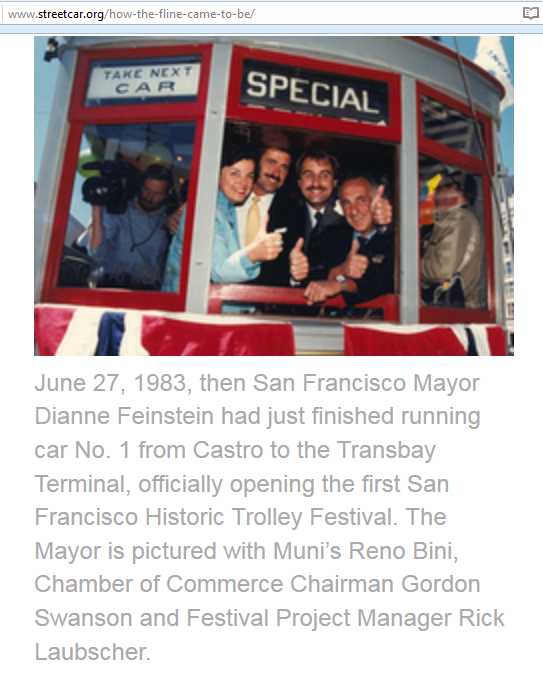 There was no where else to go. The route ran from midtown, up Market Street, up Duboce under the old mint and left on Church then right on 17th Street. That’s all the track there was. They had to use double ended vehicles like they do on the E-line today because there was no turnaround.

The Muni had just opened a year or two earlier and the stations were brand new. But the waterfront was a mess. Pier 39 was there but the sea lions hadn’t moved in yet and there were no tracks along the waterfront. Just decaying old pier infrastructure stashed away behind the multi story Embarcadero Freeway that was built during the filming of Dirty Harry and came down in the Loma Prieta Earthquake.

The original Historic Streetcar Festival saved downtown’s ass the year they had to shut down the San Francisco treat, the cable cars. They were down for a whole year for much needed renovations and the tourist industry was up a tree looking for a new ride. The cable cars to the Castro came to their rescue and turned out to be such a hit they could never let them go. Over the next decade The City rebuilt those original Market Street tracks to the Castro with a big turnout on Noe Street.

In fact, the big guys saw these little money makers for what they were before anyone and downtown landowners and merchants worked hard to get City Hall to lay new tracks bringing these beautiful historic vehicles directly into the Fisherman’s Wharf tourist zone they were creating. The City spent millions building first class tracks with big turnarounds and eventually created two new lines along the waterfront.

Now, in an epic case of forgetting where one comes from the historic streetcars are becoming something of a rarity in the neighborhood that gave them their start. Oh, yeah, there’s still a few, they’re not totally gone. But more and more people are noticing fewer and fewer of these gorgeous gleaming shiny machines trundling along Upper Market Street or picking up passengers at the Castro Street Terminal. Where did they go?

Every day a whole slew of F-line historic streetcars are choosing to take a shortcut that allows them to skip the four stops on Upper Market Street. This systematically denies service to all riders West of Church Street including disabled passengers on every single instance of this alternate route being utilized.

The way it works is drivers hit an electromagnetic switch on Noe Street that throws the switch track automatically at Noe & 17th Street so the trains go East on 17th Street towards Oakland. Normally the switch would be set to send them West on 17th Street one more block to Castro Street from whence they would head down Market Street full of passengers.

But if the drivers hit that switch they can zoom down 17th, hang a left on Church and be back in service on Market Street with an empty streetcar full of seats for the downtown riders in moments.

They never ever do this at the downtown end of the line. That would be a firing offense. NQA. I don’t think it’s physically possible to cut out downtown to increase service to the Castro (imagine that.). But it’s done every day many times a day to us in the Castro.

Our new 17th Street transit monitoring system is tracking this systematic denial of service to our entire neighborhood with great concern. We have a crises of untenanted storefronts here and we need those trains for the same reason downtown wants them: Money. Sneaky unreported service reductions from MUNI are part of the problem.

A common misconception is that trains headed west on 17th Street are returning to the yard. They did once but that hasn’t been the case this year (That would be a right hand turn at Church & 17th South to Cameron Beach Yard) and that’s a night time thing anyway.

What they are doing is turning left on Church Street and going back into service on Market Street East of Church. But don’t believe me, watch for yourself with our new tracking video system. And once you catch on, you can use the online historic streetcar tracker and watch them do this in real time.