Yet another unreported bike wreck — Why accident reports matter.

John Entwistle, Jr. reporting from 17th Street on October 11, 2016 — At 8:00 am the intersection of 17th Street (City Bike Route 40) and Sanchez Street (City Bike Route 47) was manic with cars turning every which way. Likewise 17th Street was choked with cars doing every imaginable maneuver with double parking rampant on both sides of the street. It was the peak of the morning school drop off rush hour and just over a hundred and twenty bicyclists attempted to brave the chaos during the hour I stood by observing.

At 8:10 I was watching through the lens of my camera as bikes attempted to navigate the corner, the tracks and the double parked van in the bike lane and snapping pictures to document the conundrum. Parents with kids in tow chose the sidewalk. Some bikes hopped the tracks and passed the van by merging with traffic and riding in the gauge side of the tracks.

Then, right dead in front of me, in full camera focus, this woman caught the track and bit the asphalt head on. Fortunately two other women were nearby and jumped to the rescue while a passing guy on his bike stood there to hold off traffic. Let’s pause here and take a look at the story in pictures. [Note that we want to protect the woman’s privacy so we have selected pictures with great care. This is a fine line of balancing concerns. I have to and do make these decisions to the best of my ability. – JE] 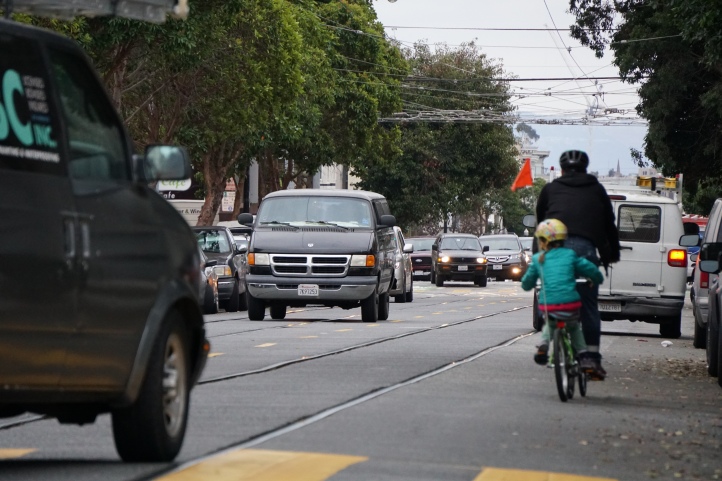 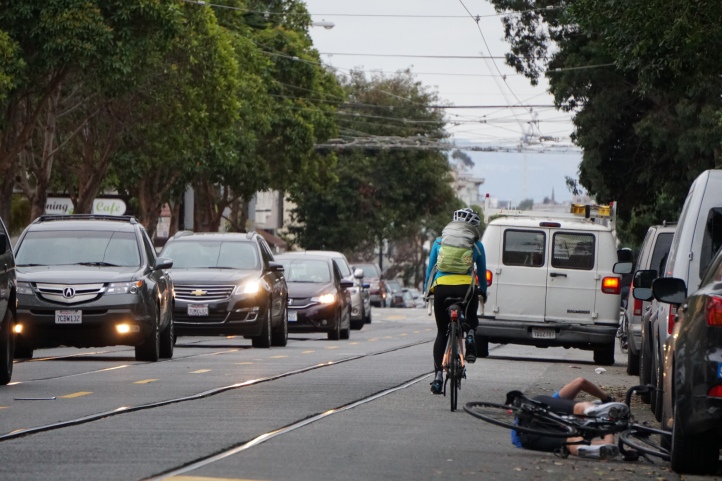 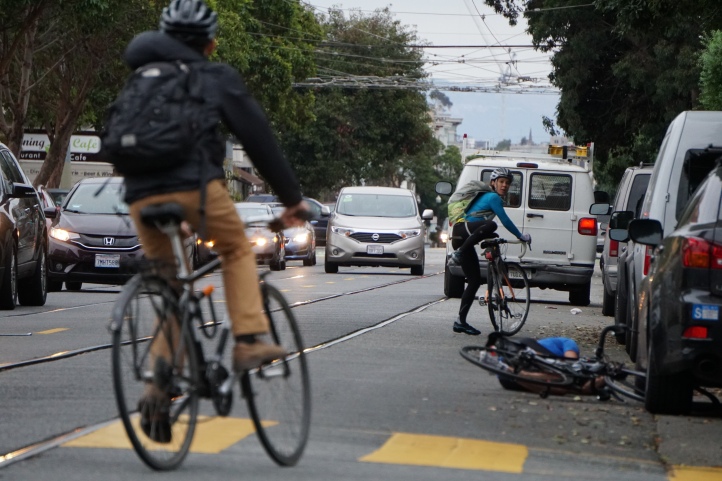 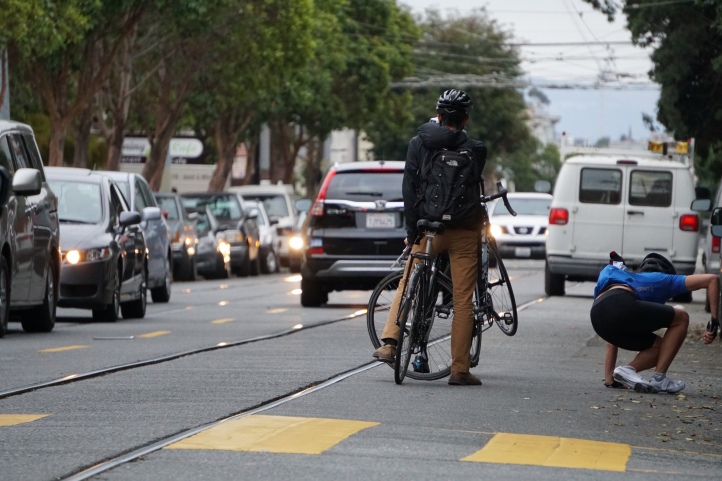 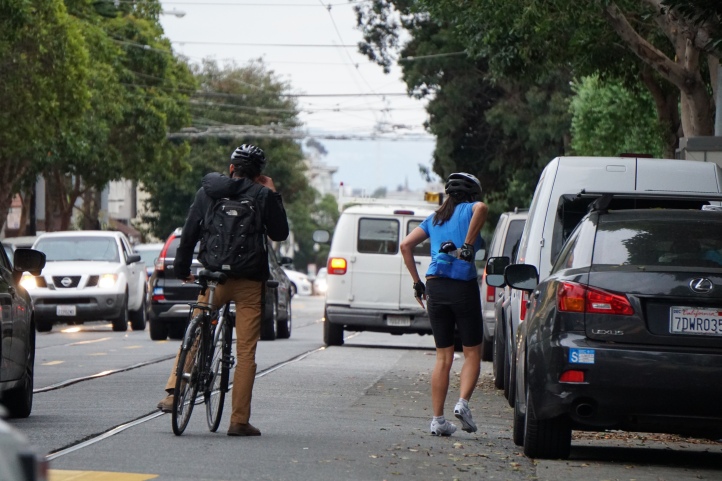 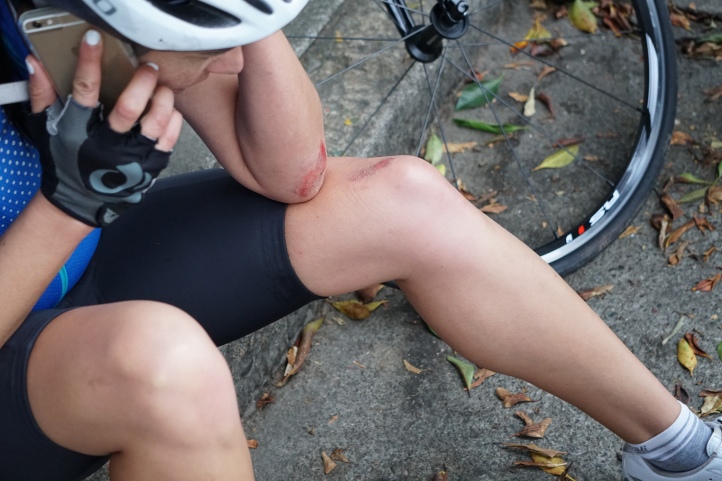 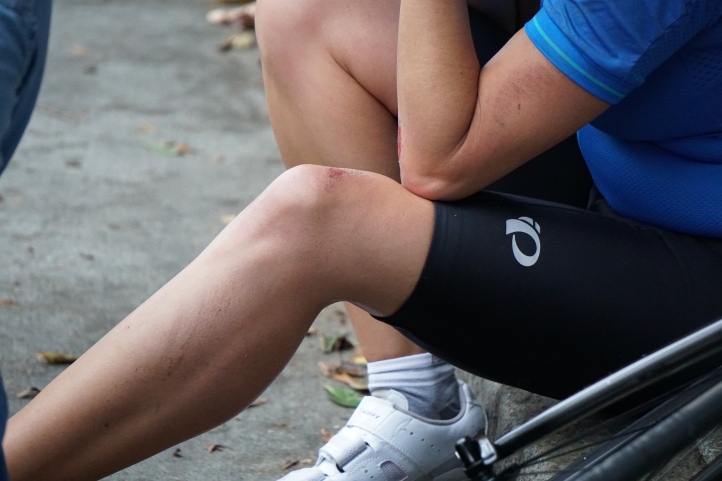 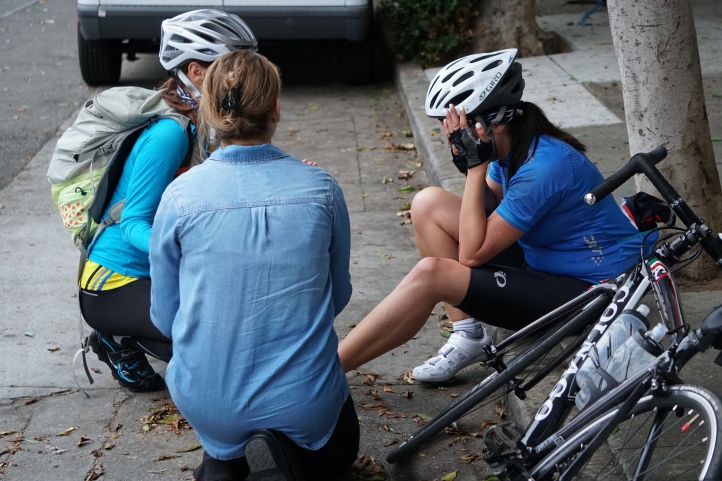 Let me jump back in here. I’ve been right there where that woman is now. It hurts like hell and you just want it to go away. You don’t accept the interruption in your life. And you think it is your fault. Completely. You’re embarrassed, vulnerable and crushed. You don’t want to project weakness for fear of the wilder-beasts. (Okay, that last bit was poetic license but the reference to pack behavior is very accurate.) And you don’t want to accept help from others, you don’t want to be bothering them, putting them off, causing disruption to others.

Even when it hurts and you may have sustained injuries the powerful instinct is to wave off assistance. “I’ll be fine!! It’s okay.”

“Call the cops? What am I going to tell them? That I fell off my bike crossing the tracks? It’s not worth the time and bother. I don’t want to call the cops and I’m not going to wait here for three hours over this.” This is what a lot of people think.

This is basic human nature. I have been there and done that myself so I really do understand the feeling. In this case at hand we can only pray that she does indeed not suffer from a concussion injury. As with most of these cases we will never know how it ends.

The problem with this tendency to not report these bike on track collisions is that ours is a data driven system. The folks responsible for maintaining this roadway, bike path and train track never find out that there is a problem if it doesn’t get reported. And if SFMTA knew what was happening hereabouts in all its agonizing detail there are a lot of things that could be done to prevent this from occurring again.

What do the experts say about reporting bike crashes?

Immediately After A Crash

·         Tell the driver to stay until the police arrive. If they refuse to stay or don’t provide ID, get their and the car’s description, vehicle’s license plate # and state of issue.

·         Get name and contact info for any witnesses. Ask them to remain on the scene until police arrive, if possible.

When The Police Arrive

·         While a doctor’s report of your injury is important for insurance and/or legal action, you do not need to take an ambulance. If there is any complaint of pain, police must take an incident report (SFPD General Order 9.02b).

If You Are Hit By a Car, Know Your Rights

·         Call the police or get someone else to call the police before leaving the scene of the crash. Request a report and get the officer’s name and badge number.

Obviously the track caused collisions are not the normal car hits bike crashes that we are used to hearing about. The situation on 17th Street (City Bike Route 40) is unique in some ways. But the engineers at SFMTA tell us that they would benefit greatly from better data about these crash scenes and accident reporting through the proper authorities is the best way to get this done.

There are issues still to be investigated and reported on in a follow up post on this topic. These revolve around the problem of the time consumed in accident reporting and ways that time problem can be mitigated. Perhaps filing a police report later is an option. We also want to get some input from the police as to what they think can be done to make these reports easier for everyone involved. Their time is valuable as is ours.