Anatomy of a Pothole Repair

Fixing the pavement on an active San Francisco Street with two-way streetcar tracks takes a lot of folks from many backgrounds and disciplines. SFMTA & DPW work together with the rail division people to dig up the area around the tracks and determine the correct repair based on what they see under the asphalt. It is not rocket science but it is more challenging than one would expect.

First off, its dangerous. These people work in moving traffic. Motorists cut right through their job site. The equipment is super hazardous. So everyone wears bright colored green safety vests and every move is cautious. Half the crew has to be there just to watch the backs of their colleagues. That’s why they like to have 11 workers on scene, for the visual impact of all those green vests and orange cones. Safety has to come first.

Secondly, it involves several departments and agencies of the City. SFMTA sends two groups into the field. The rail division people are responsible for the gauge area’s of the track (between the rails) and for two feet or so on each side of said track. Then the Sustainable Streets division take over for the rest of the pavement right up to the curb. But DPW has the large asphalt handling equipment. So everyone has to coordinate and show up at the right place ready to do their part. Choreography is the word. The actual repair job is like a musical act or a staged performance live in the streets.

17th Street has a bunch of pavement problems. Deformities, huge cracks, small cracks, chunks of pavement missing, dips and bumps, heavily degraded flange ways along the tracks, and several classic potholes. An argument could be made for repaving and resurfacing the entire street but the City has assigned a Pavement Condition Index score of 71 to our street and chose to patch certain spots.

he City has been notified that a hazardous condition exists on the roadway locally. The City really does have an obligation to fix this problem before more harm is done. On top of that our district Supervisor called a second meeting at City Hall to address the issue of bike safety along the 17th Street streetcar tracks early last month.

All of these pressures culminated September 29, 2016 causing Terry Fahey, the top guy at the rail division (overseeing several hundred employees) to visit to our little street, personally marking out the pavement deformities that needed immediate attention. Terry was met on site and walked 17th Street from Church to Noe with Oliver Gajda and Will Tabajonda, both from different parts of SFMTA. 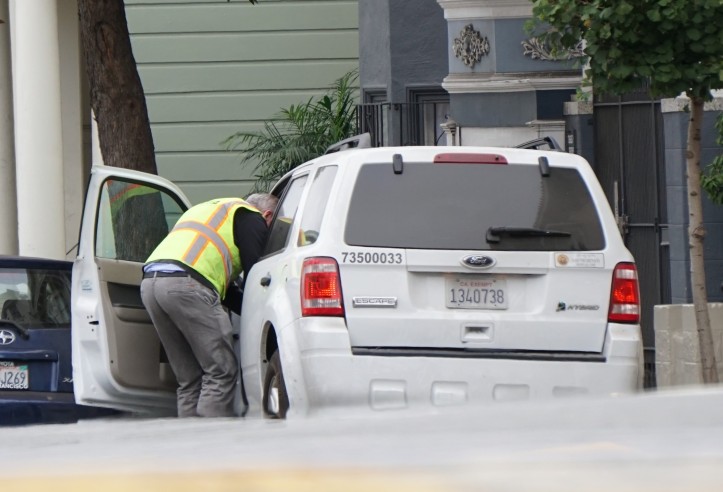 Mr. Fahey and crew marked off seven different spots but we are going to focus on the two that actually were repaired and leave the five as yet not repaired pavement irregularities to another article. Here’s some pictures of two big problems on 17th Street near Church Street that did get properly fixed. 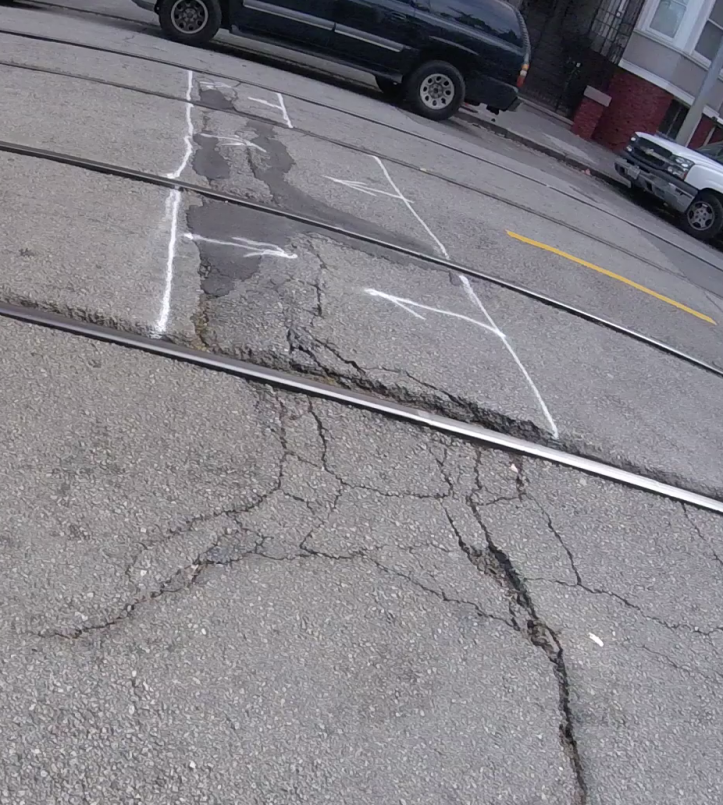 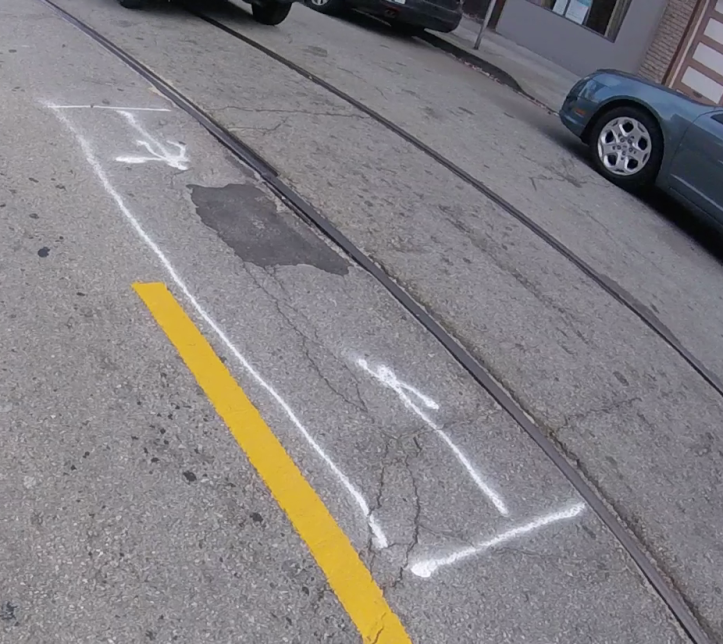 Both of these areas are within twenty feet of each other so that makes it a bit nicer for the folks who come in next to do actual work. And that starts with the “No Parking” signs that have to be put up in advance. 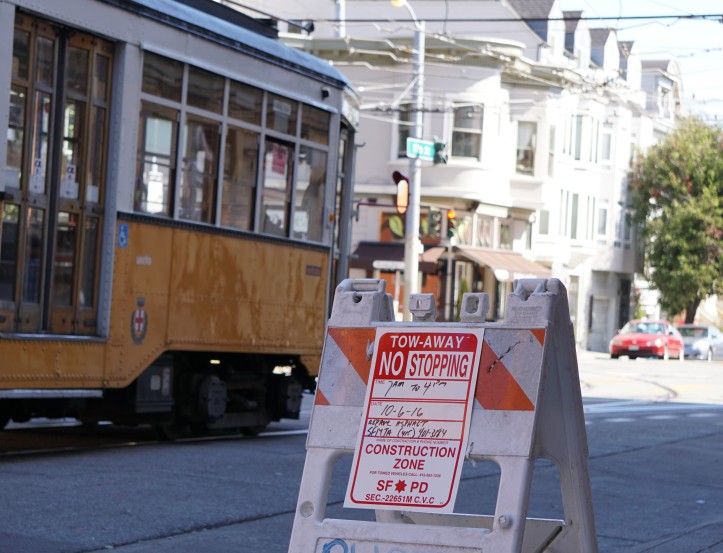 On the morning of October 6th (2016) the Calvary arrived. Okay, I’m exaggerating again but those big trucks, bright orange cones and day-glow green safety vests are impressive. The armada of heavy vehicles pulled through each carrying more people and equipment and before long the area was defined, new traffic lanes set up and the work commenced. The day isn’t over until the work is done. Once started, there are no breaks. That’s the way of the street. 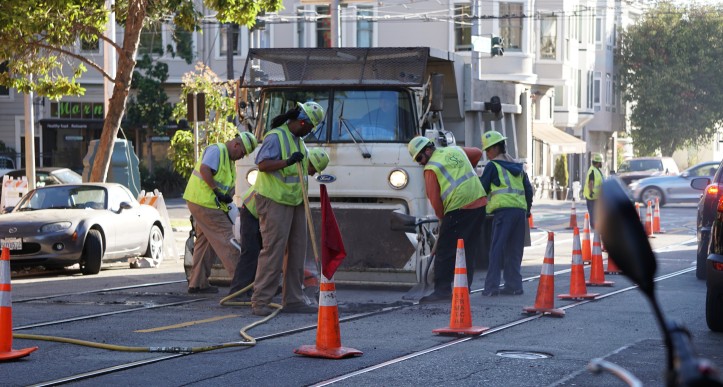 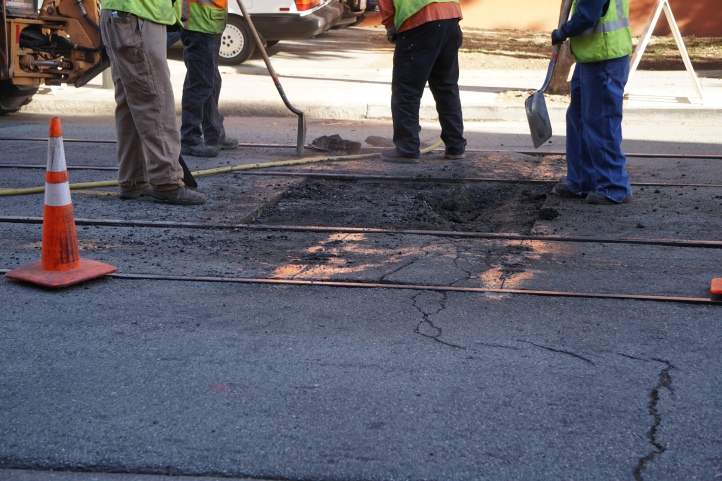 At this point both areas are cut open surgically with no damage to the bolts connecting the rails. The space is clean and ready to fill. Now the set changes a bit. The truck with the loading arm for the old debris dumps its load in the back and takes off. Our team takes a well deserved but wary break while waiting for the 350 degree asphalt to arrive. Then they show us a whole new set of skills. 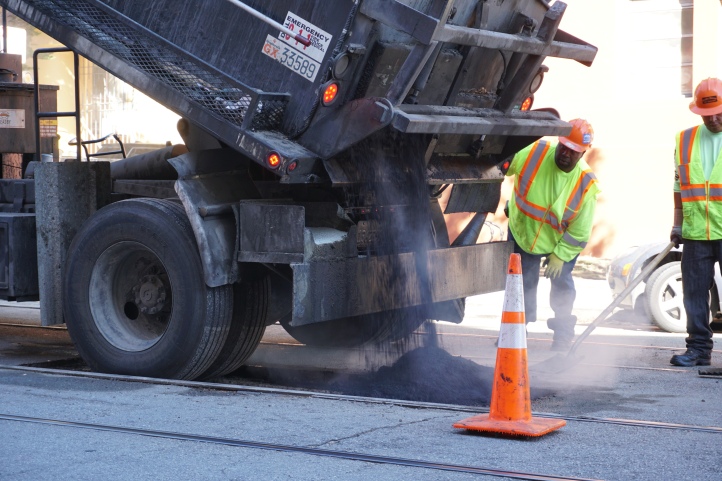 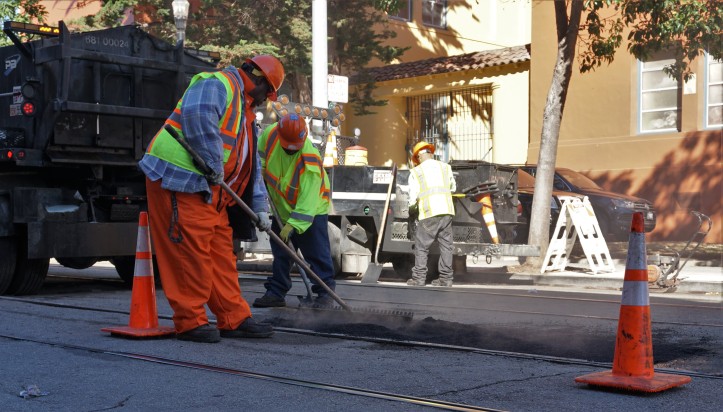 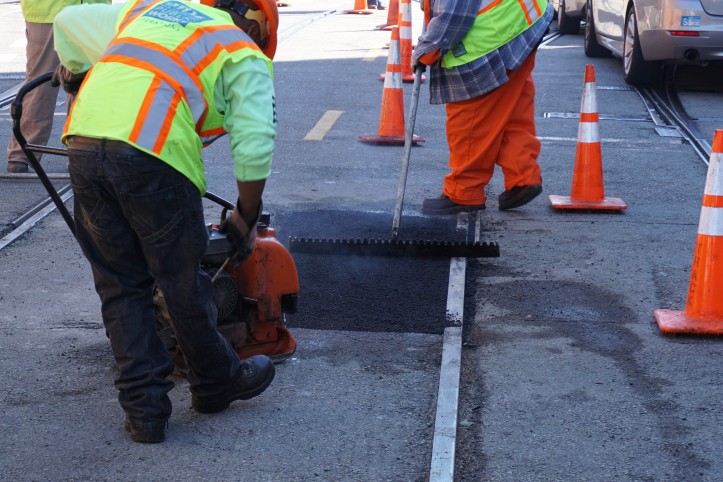 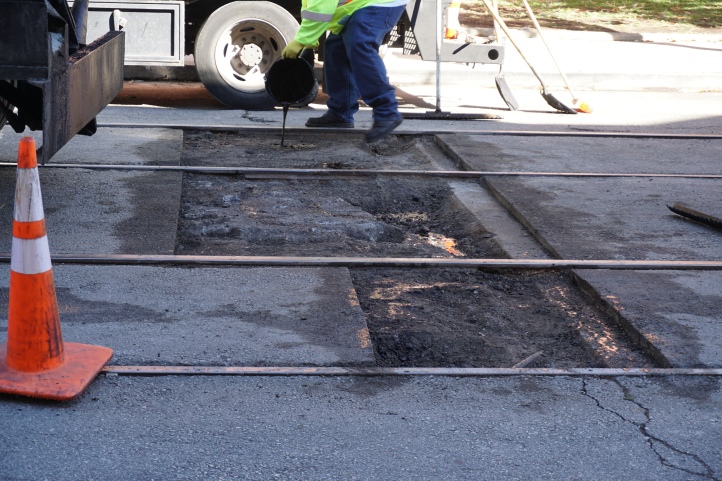 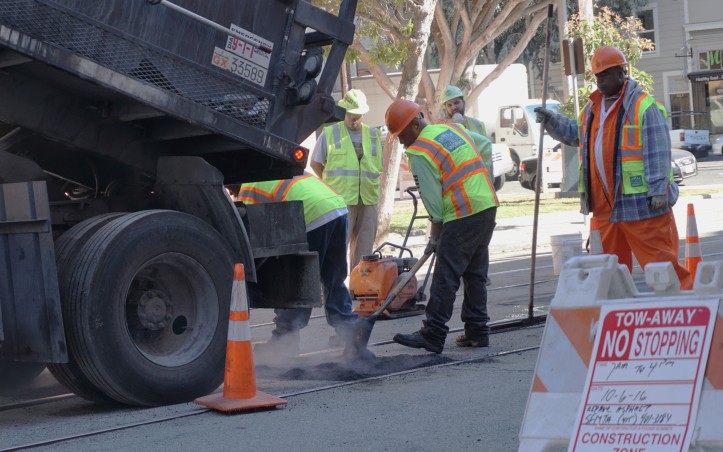 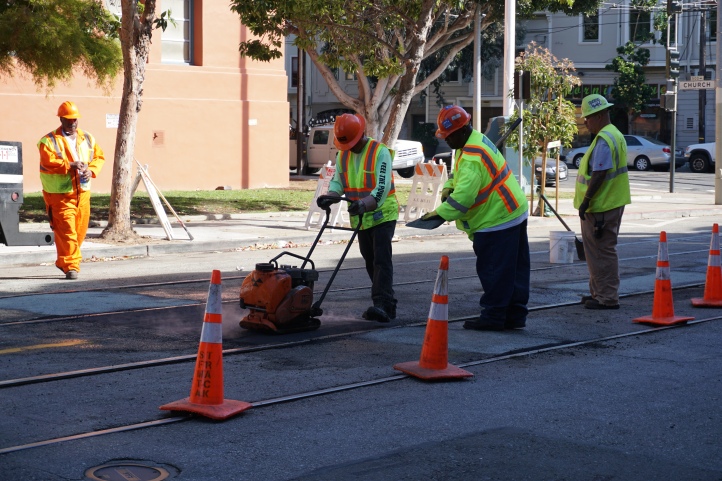 Now we just wait a couple of hours while the asphalt cools and the job is done. Two major pavement irregularities fixed at the cost of several thousand dollars in labor and a major allocation of both skilled labor and resources for an entire day. That’s the cost of maintaining a mixed use roadway with streetcar tracks and automobile and bike traffic.

And, as we mentioned way above, this was only two (2) out of seven (7) areas marked for this treatment on 17th Street. Five more areas are marked and ready for this same treatment at some point yet to come.

According to this study San Francisco is far behind the rest of the country in terms of maintaining quality roads. “Nearly one-third of the nation’s major urban roads are rated in substandard or poor condition, providing motorists and truckers with a rough ride and increasing the cost of operating a vehicle.” (November, 2016 TRIP Report)

If you want to learn more about potholes check out this Tech Brief from the U.S. Department of Transportation Federal Highway Administration.

Having railroad tracks comes with a price tag. They are not free. If MUNI really needs those tracks then MUNI has to be willing to spend the money necessary to maintain them. It seems to us that if indeed the tracks are necessary to the operations of the railroad then the Maintenance of Way should be taken seriously and done right. This day was a good start.

[We do thank Mayor Ed Lee as well as the men and women at SFMTA & DPW who came out to our street and did this fine work. We also thank our District Supervisor, Scott Wiener for facilitating this process. (And credit for an assist goes to Supervisor London Breed’s staff for getting our foot in the door. Thanks Conor Johnston!) And lastly we thank SFMTA’s Terry Fahey, Oliver Gajda and Will Tabajonda for coming to 17th Street and directing these resources our way.]