Denial of Service — F-line skips 3 neighborhoods because of two blocks.

Update: June 20, 2018 — The entire situation has changed since I wrote this article. SFMTA has acknowledged this problem and have changed their system. Cameron Beach Yard reopened this past week and all the historic streetcars have moved back to that location.

The historic streetcars are using 17th St. to connect to Church St. (during which time they do have to run empty, but that is only two blocks) going home toward Balboa Park. But, once rolling onto Church Street they are back in service, picking up passengers, operating as a supplement to the J-Church.

Moreover, on the outbound rides from Balboa Park (City College) heading downtown the historic streetcars are skipping the Castro Street Terminal so they don’t have to run empty on 17th Street. Instead, they are staying on Church St. to Market where they take the right hand turn headed downtown. This means folks riding from Balboa Park to downtown have a great ride, completely uninterrupted.

Two groups were pushing for these changes. The OffTrackSanFrancisco organization and the Market Street Railroad folks. Both groups have expressed their appreciation for MUNI’s responsiveness and flexibility. We are all very pleased with this outcome.

Three postings follow which explain the changes and my original article shall remain as well explaining the history of this route upgrade. 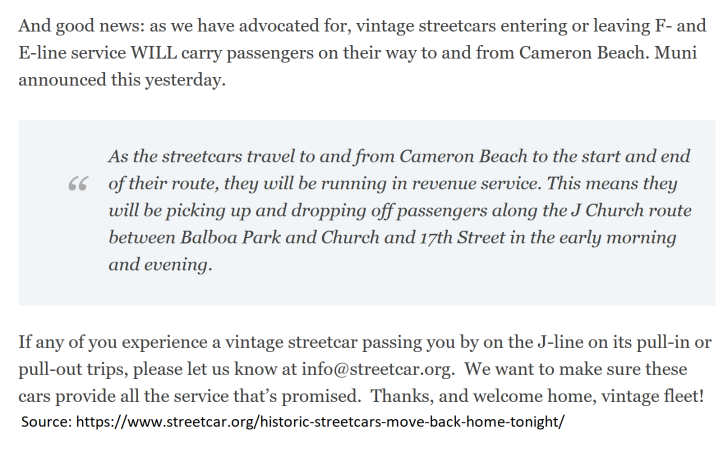 So I’m hanging out in Dolores Park on a beautiful afternoon when this absolutely lovely Peter Witt style historic streetcar comes rolling on down the J-Church tracks headed North toward Market Street. Of note was the “Out of Service” sign on the front. This meant she was going to turn the corner at 17th St. and use the old “temporary” tracks to get to the “terminal” at Castro & Market.

Those are non-revenue tracks so she can’t carry any passengers until she gets past them. On top of that Muni has designated the Castro & Market stop as the terminal from which service runs are calculated. The idea is to start and end service at the terminal and to deliver complete runs between those times. As a point of correct language use, Muni considers runs outside of that context to be additions to regular service.

I know all of this but since I started looking at the 17th Street tracks critically I have had to question Muni’s insistence on this particular route. I know why they do it. There are minor benefits to using this route. But I also know that people are being injured seriously on those tracks and Muni is ignoring that unacceptable externalized cost. And I know that if they change one tiny detail (stay on Church St. at 17th) they could serve three entire neighborhoods. For the record SFMTA dismisses this idea out of hand as unwanted meddling.

Being the persistent sort I shot a picture and fired off a tweet. And low and behold the folks at SFMTA replied very nicely confirming the policy of sending these streetcars out for the first mile or two empty. Here’s that exchange.

I would not be questioning any of this but for the fact that I live on 17th Street and am sick of seeing bicyclists severely injured on tracks used only to carry a few empty streetcars each day. I’d much rather see the tracks torn up and the streetcars staying on Church Street when they go into service in the morning. Once they turn onto Market Street they can just run an endless loop all day carrying passengers while staying off the unsafe tracks on 17th St.

The downside of this change is small, the first runs of the day would skip four stops on Upper Market where service is redundant and could be replaced with buses if necessary. The upside is enormous. Every F-Line train pulling into service would be able to pick up passengers from Balboa Park, Glen Park and Noe Valley as well as all the stops on Church. This would be great for all those folks trying to take the J-Church early in the morning to get to work downtown. Today they just see those streetcars roll by empty.

So I mapped out the alternatives. SFMTA wants to move the historic streetcars back to Geneva & San Jose (near City College) and re institute the old routes. I suggest some very small safety and efficiency upgrades. Lets compare. We’ll start local and go from there.

Now let’s step back and observe the difference in levels of service between SFMTA’s current plan and what could happen if they stayed on revenue tracks at 17th Street. If the F-Line just rode the Church Street rails into service in the morning turning directly onto Market Street instead of turning onto the old 17th St. non revenue tracks.

I was kicking this idea around with Oliver Gajda from the Muni Rail Division. While trying his hardest to find fault with this alternative service proposal he actually had a really great insight. “What will we call it? The F-Market Express?” he asked.