Asphalt Rainbows in the Castro

The entire intersection of 18th Street and Castro Street was  reconstructed  last week. The job was done by Ghilotti Brothers Construction Company out of San Rafael and a group called Asphalt Impressions from Sacramento.

The rainbow flag itself is a homegrown symbol of the gay community first sewn and visually conceived by Gilbert Baker here in the Castro almost 45 years ago for one of the very first gay pride marches. It has been the flag of the Castro and all gay/lesbian/transgender people ever since. In recent years our local merchants’ group has worked with Gilbert to keep the flag at Harvey Milk Plaza in tip top shape.

The crew’s attention to safety, courtesy and quality was a delight to observe from the beginning all the way until that very last cone was removed. They were friendly, reaching out to and escorting pedestrians carefully through the areas under construction. Hazardous conditions? Try working with dangerous equipment in a construction zone with heavy machinery rolling around you and motor vehicles cutting through your job site.

There were two goals behind this project. First, the crosswalks had been damaged by a movie crew earlier in the year and repairing them required a complete re-installation. Secondly, The City was unhappy with the drainage characteristics of the intersection as a whole.

Apparently water was forming a shallow pond in the center of the intersection just enough to be a safety issue. They wanted to build that area up a bit higher. So they combined goals and scrapped the intersection clean too two inches below grade and just built the whole thing again from scratch. 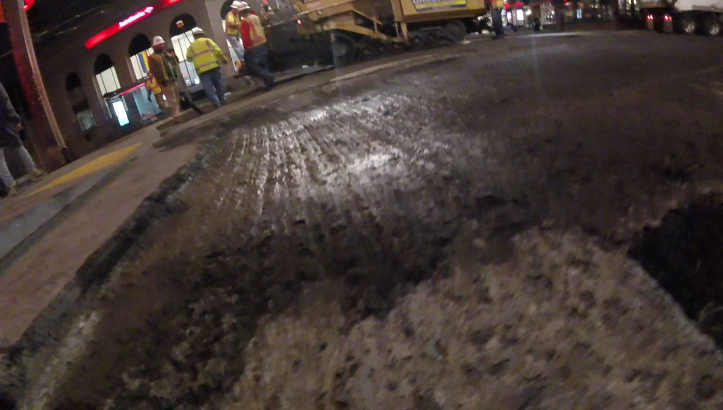 This gave me a chance to see what goes into maintaining the streets of San Francisco. This one job took six days and involved an armada of heavy equipment and at least eleven highly skilled workers on site at any given moment. Our little city has over 900 miles of streets that need this treatment every ten years so I thought it is something that we should learn a little about. In that spirit I am going to take this photo essay pretty far in terms of detail. 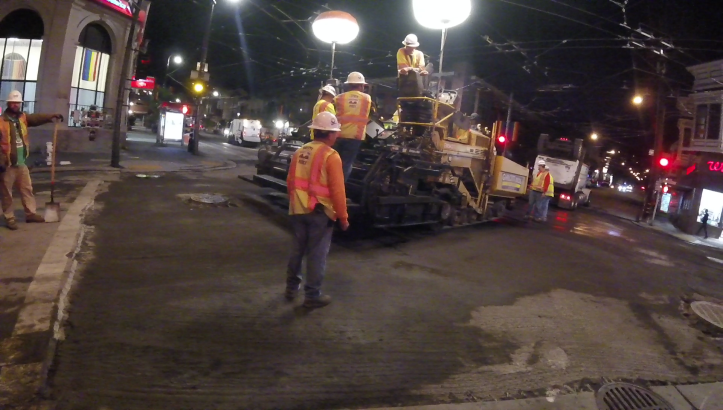 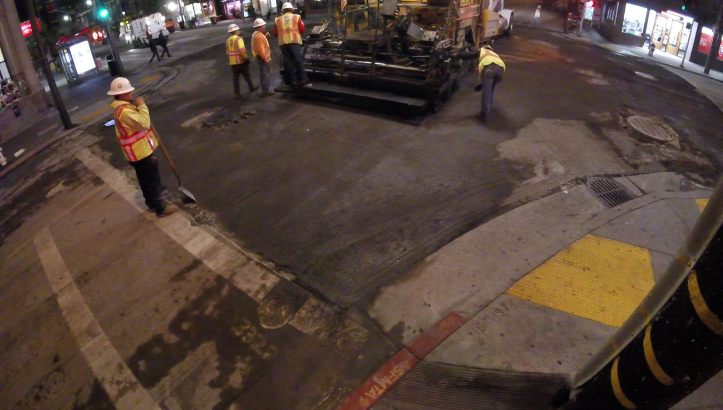 Asphalt is a mixture of rock, sand and a binding agent. What makes it malleable is heat. So the asphalt is delivered steaming hot and cools within moments of installation. These workers know exactly how to guide this process into a coherent smooth as glass roadway surface. They pay close attention to the edges and thicknesses and they make sure to do this right away while the material is still hot enough to work with. 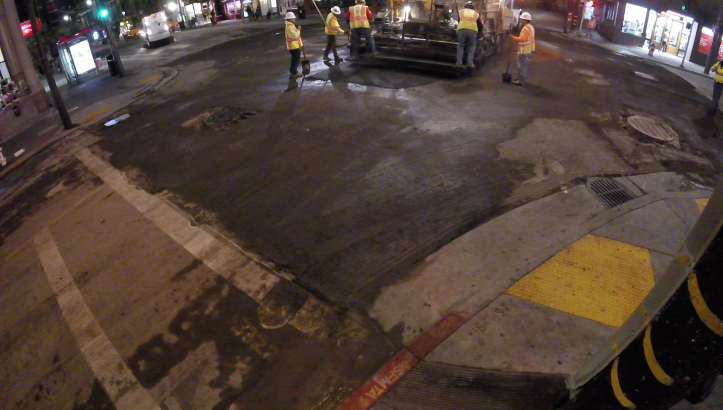 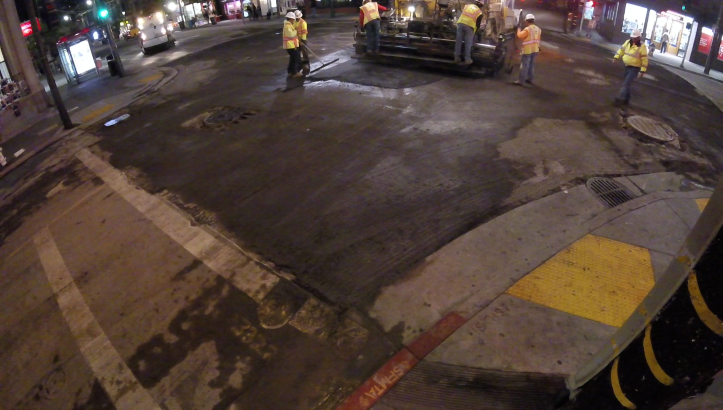 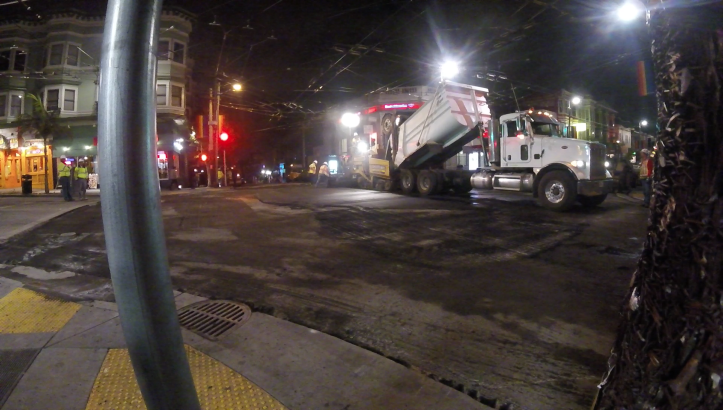 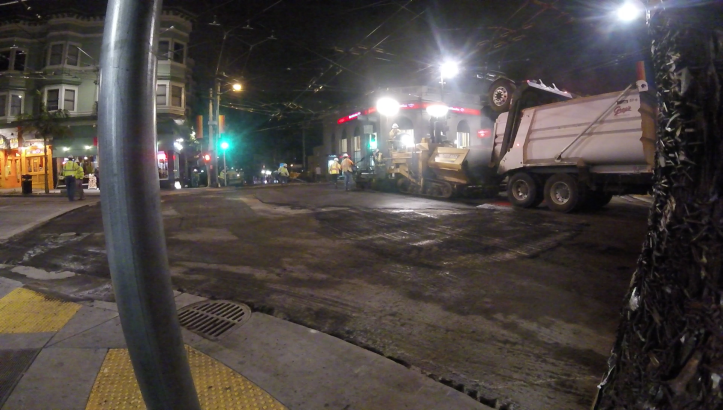 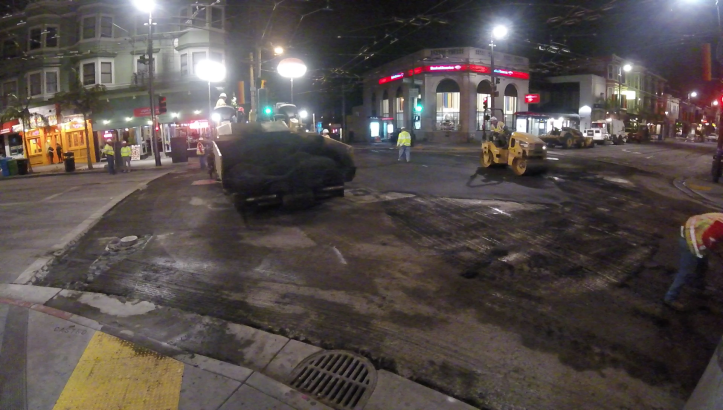 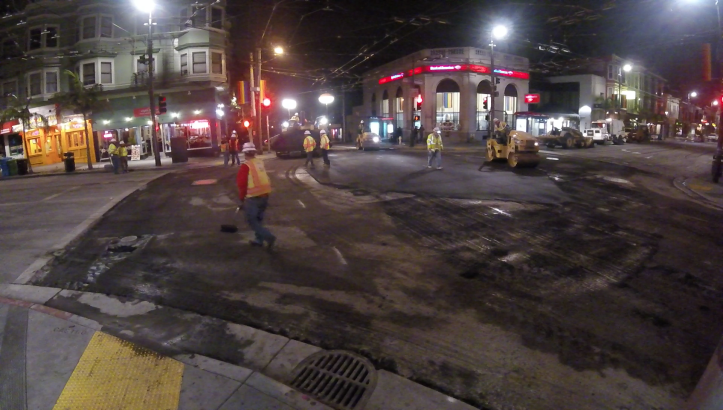 At this point it’s getting late and we are way past my bedtime. Obviously these guys aren’t hitting the sack any time soon so this is where we left them with the maestro standing center stage and the job ongoing. These guys work all night long on their feet on full alert status at every moment. They had no break truck or catering that I could see. The toilet facilities were minimal. They work in a loud dusty environment and perform massively skilled labor. They make the rest of us look like a bunch of overprotected sheltered wimps. But I digress… 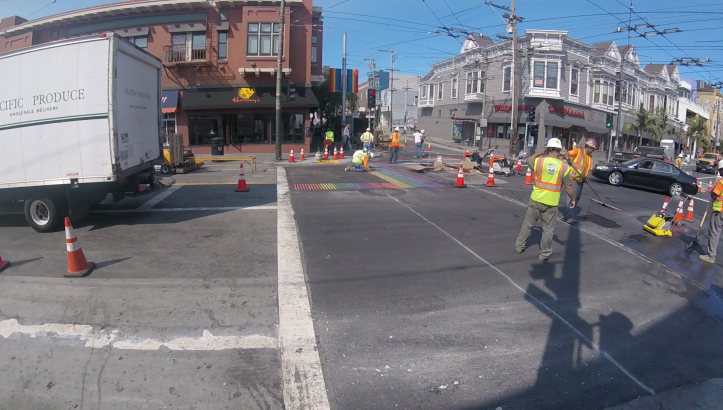 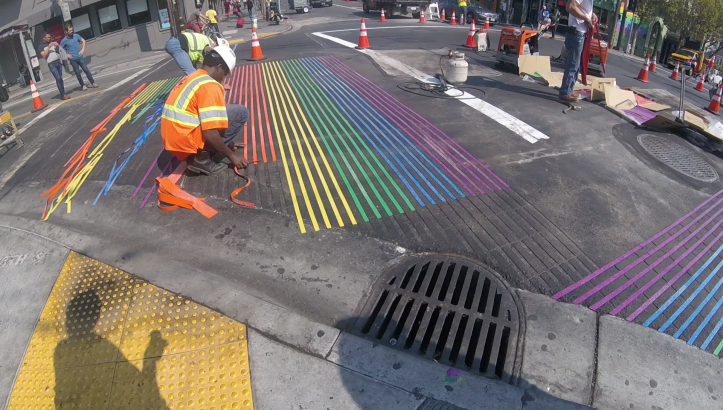 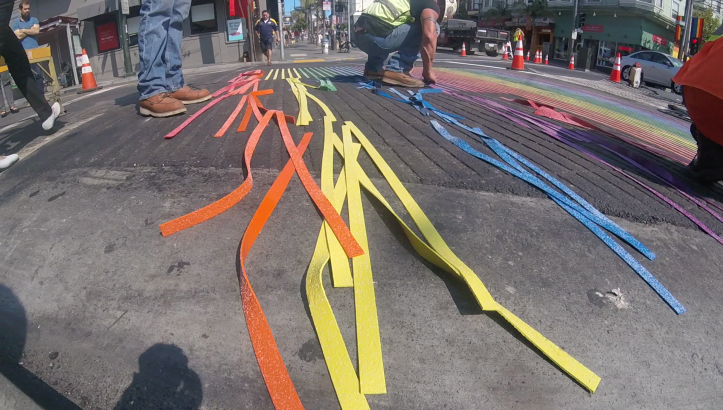 Now lets step back and see what goes into making those grooves in the pavement. Basically they heat the pavement until its soft and then they take a big plastic mat and pound the pattern right into the surface. Then they remove the plastic mat and spray the area down with water on the top to cool it and harden the asphalt again.

This is all involves a different set of dangerous equipment and skills than the previous work which is where some versatility comes into play. They are also working with daytime traffic conditions which are a bit heavier and not limited to Muni buses. 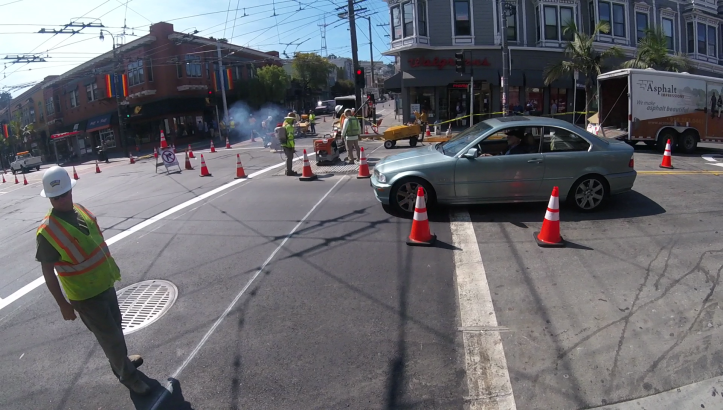 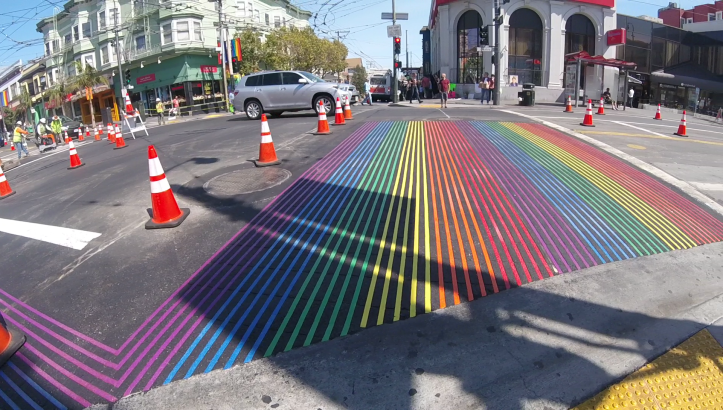 And then the next morning rolls around and look who’s out there all bright eyed and bushy tailed!! 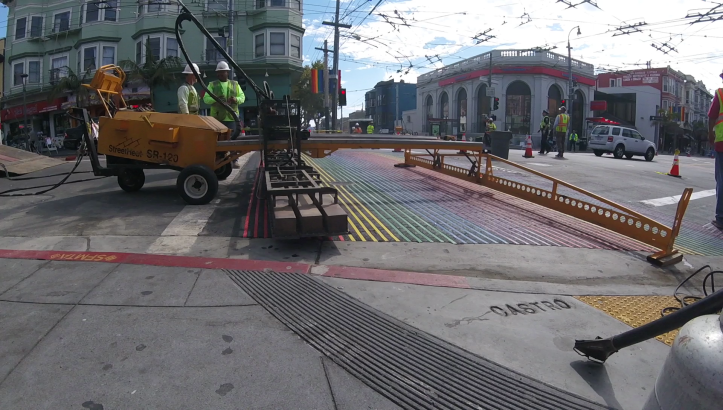 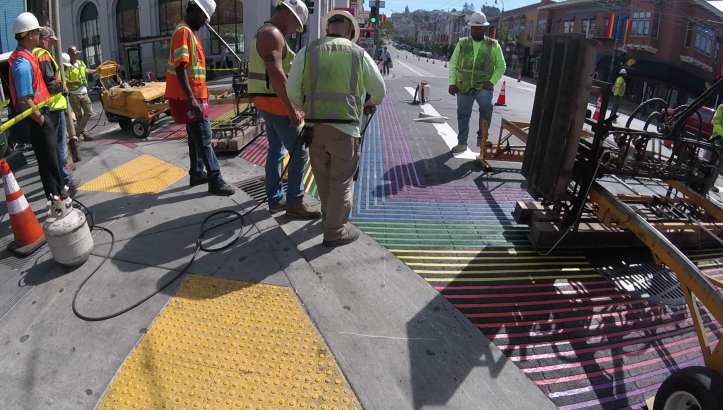 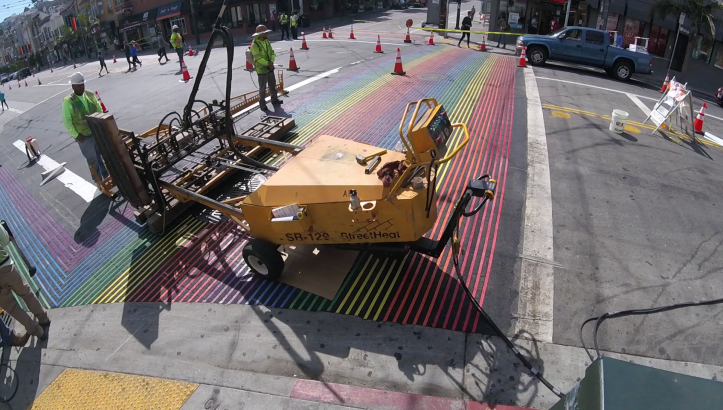 These folks decamped and took a day or two off. Then on Friday morning they popped up again and knocked out that last corner by lunchtime. A well done job, accident free!

I caught the first few pedestrians using it as the liquid ran off the surface from the unicorn tears the workers spray on the hot rainbows. They were pulling the cones as I filmed. Everything went back into the trucks and rolled off like they had never even been there.

But the intersection is perfect. A Pavement Condition Index of 100. Depending on the weight of the vehicles and the frequency of use this should hold up for more than five years perhaps ten if we are lucky. But that is a question for the experts, certainly not awestruck little old me. 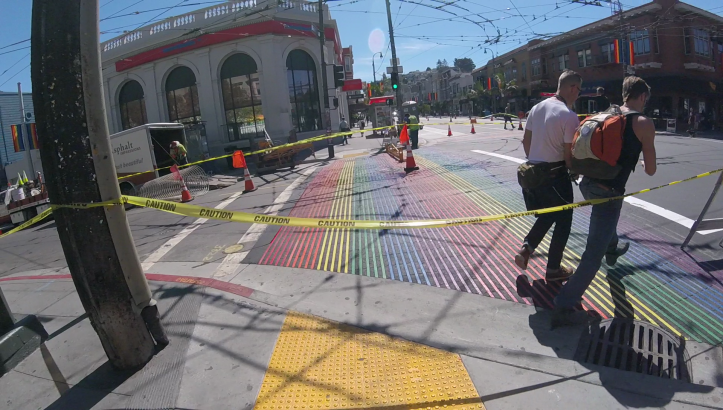 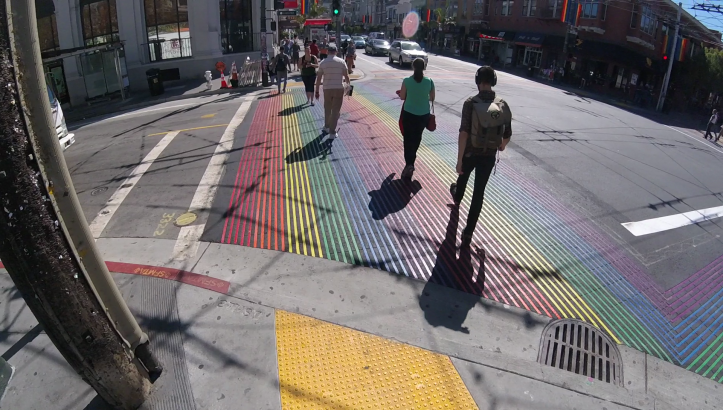 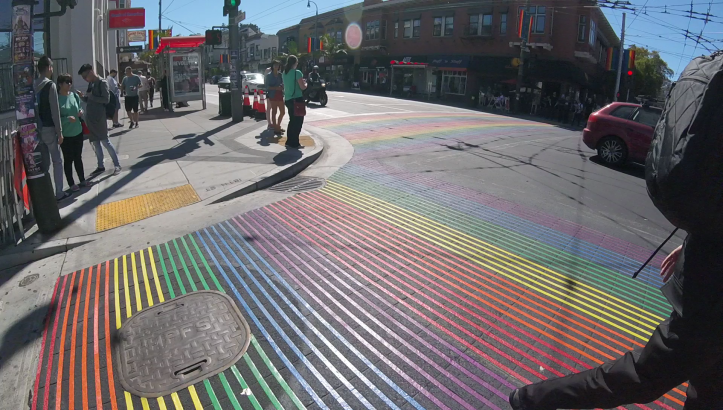 Now everyone is gonna want this. Is there such a thing as crosswalk envy?

Last thing before I sign off. I think it is fair to say that we that this is a good thing for our neighborhood. And we appreciate it. So perhaps in addition to a tip of the hat to the contractors mentioned above we should also extend our appreciation to the folks at City Hall who made this possible. So Thank You Mayor Ed Lee, District 8 Supervisor Scott Wiener, and the folks at SF Department of Public Works & SFMTA. And our friends at the Castro/Upper Market Community Benefit District.

Update (9-25-2016):  I sent out the following tweet to announce the article and thank the folks behind the curtain over at City Hall for their role in all this, and lo and behold, Mayor Ed Lee liked my tweet!! — Additionally Andrea Aiello, the Executive Director for the Castro/Upper Market Community Benefit District (Castro CBD) wrote a really nice comment. — Thanks folks! 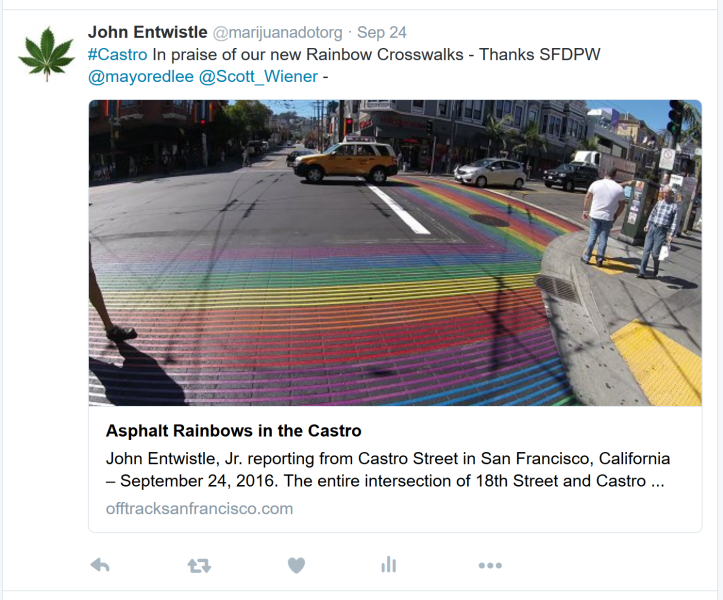 [All photographs are by John Entwistle, Jr. and are copy written under creative commons attribution non-derivative, non-commercial.]

This is a a blog established for sharing letters, replies, assorted documents and pictures related to the effort to end the bike-muni track bloodbath on 17th Street.
Loading Comments...
Comment
×
%d bloggers like this: