At the SFMTA Board meeting on November 7, 2017 the 17th Street Safety Project was given its final approval. The hearing lasted several hours with presentations from Tom Maguire, the Director of Sustainable Streets, Transportation Planner Luis Montoya & Engineer Mike Sallaberry also of the Sustainable Streets division of SFMTA. Many people testified, some against the proposal because of the parking impacts. Others spoke of injuries they had personally sustained or witnessed all directly attributable to the tracks on 17th Street.

State Disability Board Member Bob Planthold commended the planners on their inclusion of specific treatments such as curb ramp improvements on several nearby crossings such as Church and 17th. Julia Raskin a Community Organizer from the San Francisco Bike Coalition spoke passionately on behalf of their membership urging the SFMTA Board to do the right thing and create protected bike lanes on both sides of 17th Street.

Ultimately though, as SFMTA Board Chairman Heinicke stated for the record, it was the stories of the people who have fallen on the tracks that pushed him to vote for Safety First. Even with the fairly short notice Rachel Masters and nearly a dozen other crash survivors attended that hearing and told their stories. Some of those experiences were heartbreaking accounts of broken arms, shoulders and terrible trauma.

Toward the end of the hearing as the staff/Board final questions were happening Director Joel Ramos related the most compelling account of his family’s experience trying to bike in SF. His wife had just become a bicycle commuter which was a gigantic lifestyle change for her, one which benefits our entire community by reducing the number of cars utilizing our streets. Then one day she was riding down 17th Street, she hit the tracks, crashed into the pavement and ended up breaking her arm. Now she is afraid to ride a bike in San Francisco. 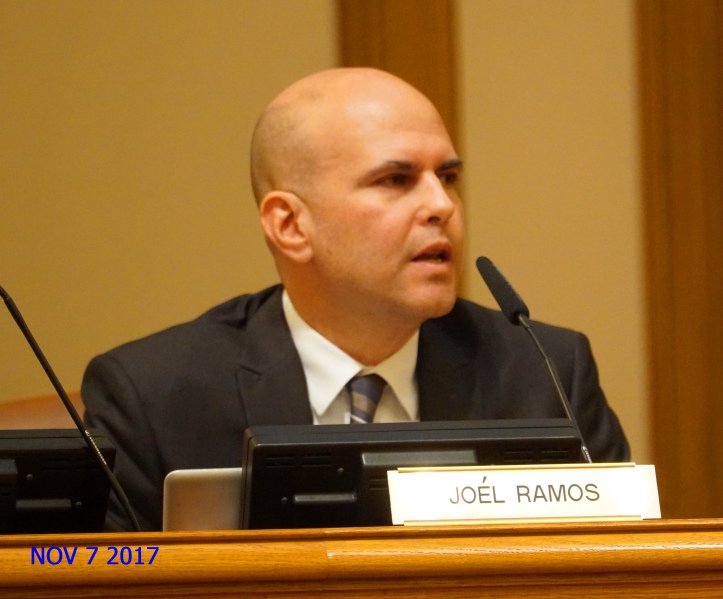 All of that said, the plan does remove all parking on 17th Street between Church and Sanchez Streets. 46 spaces total. And it replaces that space with a level of bike infrastructure rarely seen in San Francisco’s residential neighborhoods. For the 1,000 people who ride this street every day this will be a game changer. But the reduction in supply will also dictate an upgrade in parking management so that the remaining spaces serve the greatest number of people.

That parking management aspect can take several forms. More metered parking for starters. And more vigilant enforcement of the two hour limit and the three day limit. Those are the methods specified by the SFMTA Board at this hearing but it is possible that they may also look at the available parking for disabled people and perhaps designate more spots as reserved for such use.

Upgrading the parking situation on Sanchez Street between 18th & Market Streets to metered back in angled parking and adding a few more spaces for disabled people are certainly options which may come into play.

There are a couple of web resources available, mostly through the SFMTA website so they may (will!) get moved around sooner and later. Let me list and link them right here:

Staff report for the SFMTA Board Members. — This is pretty impressive. While it looked to us from the outside like nothing was happening it turns out the planning folks at SFMTA were actually doing all kinds of necessary steps. Some of this is stuff we would not have thought of on our own. Very impressive.

As SFMTA Staff explained, many alternatives to the plan were considered. This is true. As many of the articles on this blog reflect, this was a very intense vetting process. No ideas were left off the table. That said the Rail Division did team up with SFMTA’s Public Relations Division to protect their interests (read: tracks!). They made darn sure that the idea of tearing those stupid useless dangerous temporary tracks out of the ground went nowhere. And to their credit they prevailed.

Now that the SFMTA Board of Directors has approved the plan what happens next? Nothing immediately. But the first steps will be new signage for the entire street which must be ordered and installed. Some curb painting may also be in order. Then they will paint in the first changes outlying where the concrete islands will go.

Eventually they will reorient the flexible posts at the corner of Church & 17th. And somehow, during all this they will slip in the modifications to 17th Street and Church (And 17th & Hartford) on the corners.

Much of this will be implemented with consideration to the Everett Middle School calendar which means that changes will be most likely to happen during the winter vacation.

Beyond this there was some additional discussion and inquiry from Director Heinicke on the topic of the condition of the Muni tracks and what it would take to bring them up to a safe point. Staff tried to tell him its impossible and they don’t intend to do anything for at least the next 15 years with regard to resurfacing 17th Street but Acting Chairman Heinicke specifically requested that they return in four months with a better answer about those tracks and to report further on what has been done to improve parking management in that immediate area.

A bit of local history. The 17th Street tracks (between Church & Prospect Streets) were installed in 1972 as part of a temporary shoofly track system designed to keep Muni running during the construction of Church and Castro Street Stations. The original plan was to remove those rails when the Muni tunnel began operations under Market Street which turned out to be back in 1982.

Instead, The City intervened and nixed the removal plans in favor of leaving the tracks in place. This perpetuated an extremely hazardous situation which only got worse over the ensuing decades as the soft asphalt eroded around the tracks creating huge ruts that have become notorious for grabbing bike tires and sending riders to the hospital.

The City bike route system complete with painted Class II bike lanes as well as sharrows and assorted other infrastructure is a relatively recent addition to San Francisco’s streetscape. The plan dates back to 2005 but because of obstructionist lawsuits (Coalition for Adequate Review) the lanes were not actually installed until practically 2011. At that time a very useful and well thought out Class II bike lane was installed on 17th Street West of Castro Street and East of Church Street.

Oddly enough that path disappeared for several small blocks from Church Street to Castro Street leaving bikes to navigate the area between the parked cars and the barely used Muni tracks. This area became a local “Bermuda triangle” of sorts, a stretch synonymous with track related bike crashes.

So why did the bike path disappear in this place where it was most needed? Because of the narrow width of 17th Street the path would have intruded into the kinetic pathway of the historic streetcars or been situated too close to the “door zone.” So planners were simply unable to install any bike path for those several blocks. (Read more here.)

In May of 2016, a mother ferrying two small children to preschool hit the rails and suffered extreme injuries in a track caused collision which was filmed by nearby security cameras. This video found it’s way to City Hall where a young man named Conor Johnson, then Chief of Staff to Board of Supervisors President London Breed intervened to help solve this problem. A dialogue was immediately commenced between SFMTA Senior Staff and a concerned neighbor on 17th Street. Engineer Mike Sallaberry and local activist John Entwistle ended up working together for the next year and a half.

Supervisor Scott Wiener was caught blindsided by this issue which popped up right in the middle of his extremely contentious fight for the State Senate seat which he currently occupies. To his credit, Scott has never been a big bike rider but he is a very smart compassionate man and as he came to understand this issue his office and staff (Ann Fryman & Andres Power) hosted the initial City Hall meetings from which the 17th Street Safety Project was born.

We will be continuing our coverage as preparations begin and changes occur.