Back in the late 1980’s walking under the old mint on Market Street one used to see the MUNI folks working on Historic Streetcars right out in the open. That set of tracks is called the David Pharr Division Yard.  It was entertaining to watch. That effort has grown into a railroad and rolled on to bigger yards but those tracks are still there connecting Market Street to Church Street. As MUNI would put it: “We use those tracks.”

This matters because if MUNI uses the Duboce Avenue option then they won’t need 17th Street for taking the Historic Streetcars out of service. But even suggesting this tiny minor change flusters the folks at MUNI management. When asked directly about the Duboce Avenue option MUNI directors farmed the question out to a professional public relations officer who simply evaded the query.

Speaking off the record MUNI supervisors say those tracks are good to ride on right now.

Below are several photographs from 2013 showing the Duboce Avenue option from Market Street straight all the way through to turning South onto Church Street. The MUNI rail vehicle is super interesting in this case. (And if your eyes are sharp you’ll spot the F-Market Streetcar on the other track.)

There is also a map that was sourced from a recent conceptual engineering study. 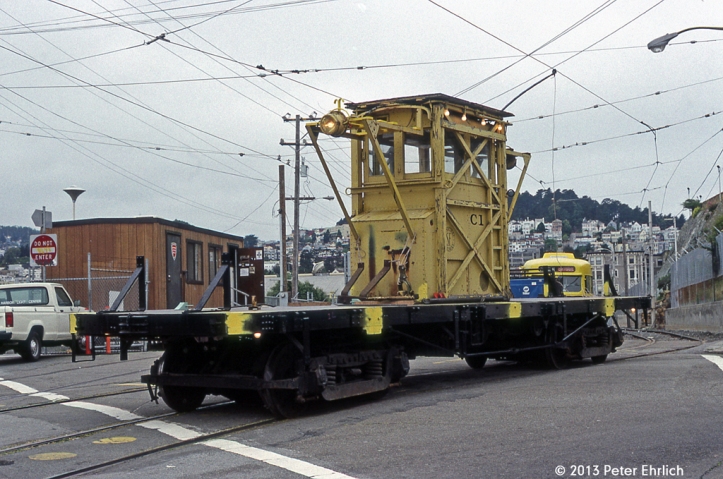 Then Google Earth kicks in with some very recent close ups of this same corridor. Very handy. Better than riding over to that intersection and looking. Bottom line, the tracks, the switch off Market Street and everything is in place now for this path. Why does MUNI seem to want to abandon these tracks?

And one final link. We are pushing this route because it is safe and the alternative is 17th Street which is structurally unsafe. Please remember that we are trying to stop a crisis on 17th Street where the MUNI tracks are trapping bike tires causing collisions and crashes on the neighborhoods main bike path.

We have caught several of these collisions on video such as the mother with her two small children and posted them at: OffTrackSanFrancisco.tumblr.com.