SF MTA to Sup. Weiner: We still will not remove the tracks.

SF MTA insists that the tracks on 17th Street are in good condition despite photographs posted online which demonstrate otherwise. A You Tube video showing a local mother and her two children traumatized on these tracks has received over 2,000 hits in a week. But the transit agency says MUNI plans on using those rails again next year so ripping them out is not an option. Tuesday at City Hall, Supervisor Scott Weiner’s Office reiterated SF MTA’s position regarding these non-revenue tracks but said he “is very motivated to pursue high-impact solutions to this hazardous intersection that can be implemented quickly.”

SF MTA offers no explanation for their insistence on using these specific tracks or why they’re so eager to move the whole fleet of historic streetcars into an inherently dangerous route in the first place. They refuse to consider safer alternatives to using 17th street, once again for no apparent reason. The plan right now is to externalize the costs of this ill advised move back to Cameron Beach Yard in blood and broken bodies on 17th Street in perpetuity. Right now they are averaging 200 injured people per year on these barely used rails.

SF MTA officials at the Tuesday meeting admitted to being out of touch with the area and were woe fully unaware of the most basic facts about the 17th Street track from Church Street to Castro Street. To their credit and due to Supervisor Scott Weiner’s urging SF MTA officials have pledged to walk the tracks with local activists in 12 days, a major step in the right direction. So far, however, SF MTA has done nothing with the exception of placing one shovel full of ash fault on a pothole.

Or in their words: “After receiving your letter, we immediately inspected the track to ensure that the track and pavement was in good condition. We did find one pothole that we are repairing. The trackway however was in good condition based on the inspector by our Track Department and Maintenance of Way Director.” [sic.]  — Muni Director of Transit John Haley, June 23, 2016.

So why did two (2) people get maimed in a half hour on tracks “in good condition” on 17th Street this past Monday night (7-11-16)? How did the woman carried off on a body board at 17th and Prosper crash on a five inch gap that was documented on this website over two weeks ago that four Supervisors asked the SF MTA to check into? Why hasn’t anyone from our county government apologized to the people they are hurting on 17th Street? Just a simple, “I’m Sorry.”

These two shots were taken shortly after 5:00 PM on Monday. This young man was wearing a helmet and proceeding Westward through the intersection of Church and 17th. I blurred his face in the photo intentionally but  I wanted to show what we are seeing which is pretty hard to look at on a regular basis. Each of these track caused crashes is a serious medical event requiring skilled EMTs and first responders. The police need to be more involved in documenting these situations.

They were still putting him in the ambulance when I looked up the street and saw a second crash a block to the West on 17th and Prosper Streets. This second crash appeared even more gravely serious with the victim, who I believe was a woman, laid out on a body board for transport. She was riding a Scoot rental Scooter and also wearing a helmet, and she was headed Westward on 17th Street. 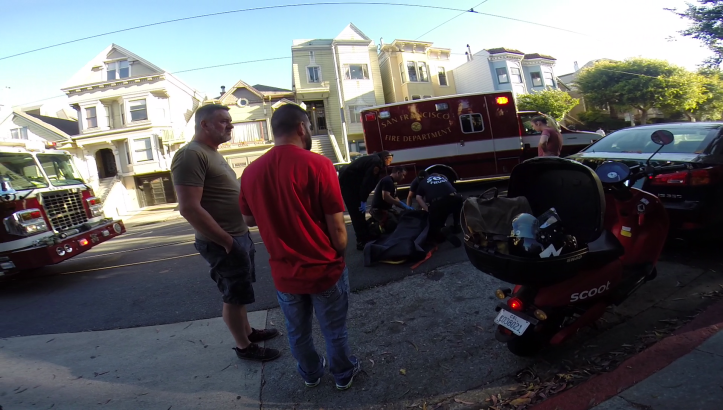 The especially bad part of this second crash is that it occurred on tracks that this website  documented two weeks ago as dangerous that we have been begging the SF MTA to repair. It is inconceivable that they would ignore these detailed pictures and let someone get hurt but they did and they still are. That hazard at 17th and Prosper is open for business right now, as are all the rest of the hazards photographed and measured on that page.