Update: December 15, 2019.  San Francisco Department of Public works recently got to 17th & Hartford (our first critical crossing) and did some excellent work. They installed well designed state of the art disability access ramps to all the corners at this much traveled intersection.We are still waiting for any information about the other critical crossing at 17th & Church Streets.

The ramps at Hartford St are gorgeous and are providing a much needed service to many pedestrians. It is a major upgrade to this crossing and is very appreciated.

Below are several photographs of the wonderful work done here and beyond that we are leaving the original article. It is our prayer that Mayor London Breed’s Fix-it Team will help us attain the same level of quality and disability access at Church St & 17th St as we are now enjoying at this first location. 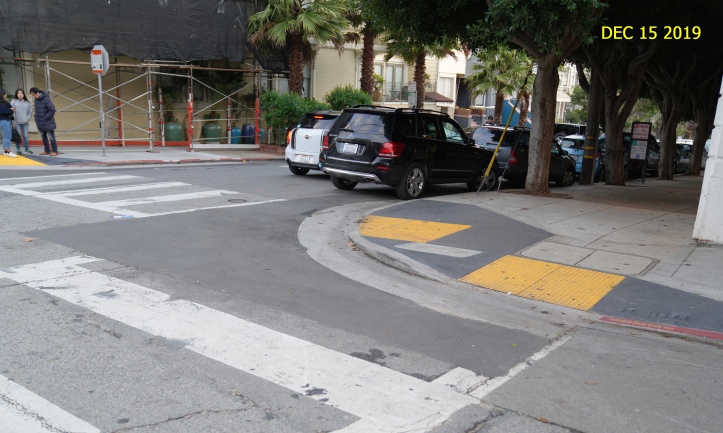 Update December 14, 2018: D8 Supervisor Rafael Mandelman and his aide the Honorable Tom Temprano asked DPW for the latest. They were kind enough to forward me the agency’s answer. We are very happy about the work being done sooner rather than later but still want to see a curb bulb out at Hartford & 17th St.

Here’s some updates on those curb ramps –

Per our curb ramp program, we received a request for curb ramps at this location in August at a public meeting. Ramps for this spot were then designed by our civil engineers and included in our fiscal year 18/19 curb ramp transition plan. The designs were issued to our Cement Shop about two weeks ago. We estimate that these ramps will begin construction next month and be complete by the end of January. The tentative schedule is not a guarantee and is subject to delay due to weather or other unforeseen circumstances.

This is the area where the f-line terminates on 17th Street at Hartford Street. This three leg corner should be quiet as Hartford is a tiny two block long residential street and 17th dead ends at the Chevron Station. But it is very dangerous with cars whipping through in the most unpredictable ways.

So neighbors lobbied for a long time and finally, just this past year their prayers were heard. Mayor Lee’s “Wonder Woman,” Sandra Zuniga and her team worked with the SFMTA sign shop folks to install a beautiful new thermoplastic “Abbey Road” style crosswalk which has helped.

But this is a crumbling high curb that gets a lot of use and mobility challenged San Franciscans have requested a curb ramp for reasons that should be pretty obvious looking at it. Unfortunately we haven’t a clue what the current status of that request is or whether or not DPW has even approved this corner for a curb ramp. 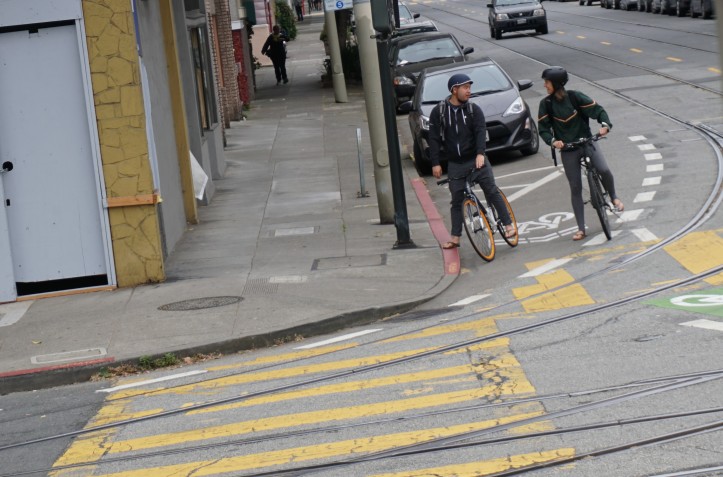 The other location that needs immediate attention is the intersection of 17th and Church Street. This corner is an ADA nightmare. It features old style cuts considered illegal now. The slopes are too high and they have other design flaws. Worse yet is their orientation which is North-South.

Pedestrians using the East-West crosswalks have no curb ramps at all. They have to remain in the street crossing both an ADA non-compliant grate (Huge slots!) and a train track with an open flange way to go around the corner to access the substandard single curb ramp. This puts wheelchairs in the bike path and in the operating zone of the f-line Muni streetcars.

The good news about this corner (Church & 17th Streets) is that DPW is aware of the problem as well as the fact that several disabled people have requested curb ramps. The bad news is that it is still not fixed and neighbors don’t know what the current status is or who is the point person at DPW on this project.

DPW sent folks to the spot to survey existing conditions last year. Nice people and we actually caught them on film and even looked over their shoulder to see the corner diagrams. Update: June 12, 2017: Took these pics this morning of the fine folks from Dept. of Public Works Infrastructure Design Construction team at 17th & Church St. this morning. They explained that they are doing the layout work for full curb ramps on all four corners. I thanked them on the spot for helping us in the struggle to make the corner as safe as we can and as accessible as can be. Good people.

Update: January 2, 2018: While the bike path installation effort has commenced the work on the corner of 17th & Church as well as the work at 17th & Hartford St. has been deferred. We know that something is ongoing in the planning stages and that the job does have a lot of complexities to work around.

One bit of good news. We are on the project list.

We also spotted another team of Department of Public Works officials conducting another on site evaluation/planning session of some sort. That was on December 8th, 2017 at the intersection of Church St. & 17th St. I shot a few pics for the record. 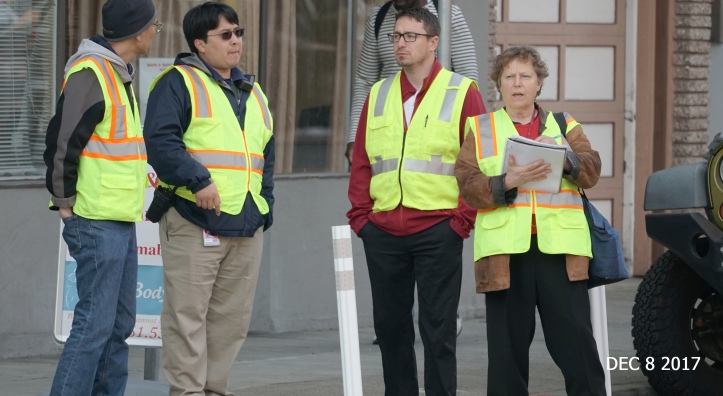 Prior to the 1950’s mobility impaired people were pretty much screwed. Their options were limited everywhere and basically they did their best to get by. Friends helped and money didn’t hurt. But access wasn’t a right.

What changed everything was a fairly large number of veterans coming out of World War II. Many of these men were wheelchair bound for life and they banded together to fight for the needs of combat wounded vets integrating into civilian life.

“While these activists were taking their own measures to ensure the world they lived in was accessible to them, federal legislation increasingly recognized rights for disabled Americans. In 1968, the Architectural Barriers Act was passed in Congress, which required that federally funded facilities remove obstacles in the built environment. While limited in scope, this breakthrough in legislation reflected the work of disability activists and laid the groundwork for the 1990 passage of the Americans with Disabilities Act (ADA). The ADA prohibits discrimination and provides for equal opportunities for people with disabilities, laying out accessibility standards for buildings and public spaces throughout the U.S.” — Source: http://americanhistory.si.edu/blog/smashing-barriers-access-disability-activism-and-curb-cuts

A picture is worth many words. Here’s a couple of tech diagrams that San Francisco’s experts have developed through the city engineering departments. Then a couple of drawings from the folks at sfbetterstreets.org. This should sharpen your eye up a bit. 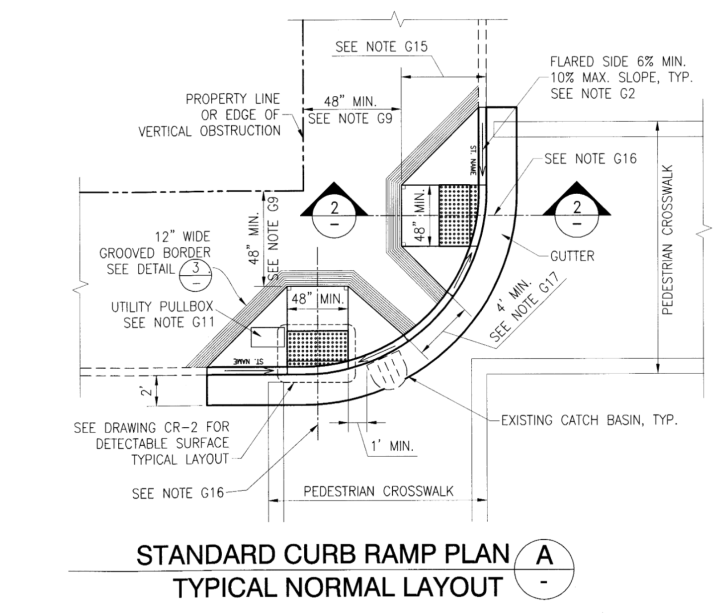 I think you can tell from the level of detail that these are from the Department of Public Works. These are two of four drawings I lifted from a detailed planning sheet produced by SF DPW. The next two drawings are simpler but exact where it is important. These are from sfbetterstreets and you can read much more at the source. 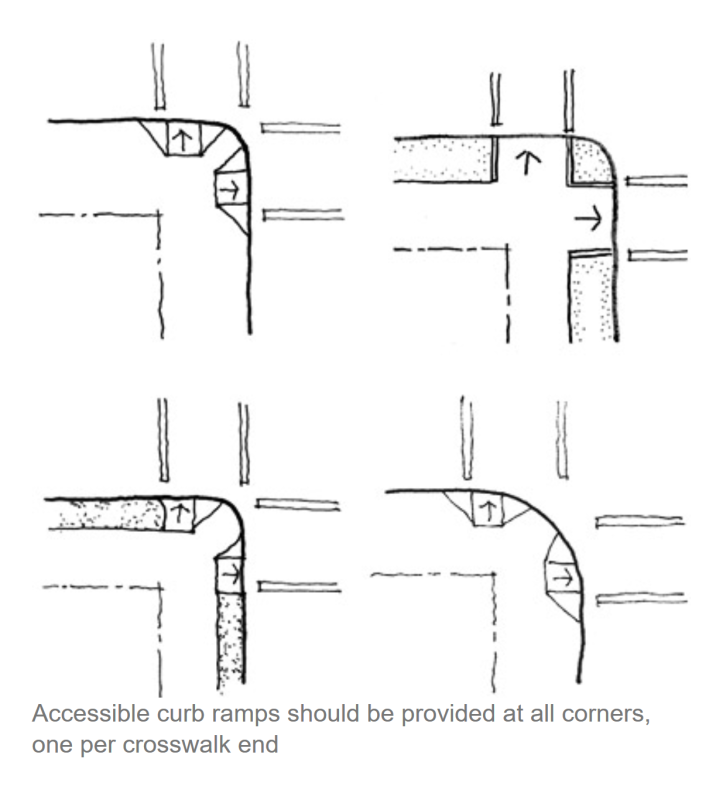 A peek at The City curb cut map:

Obviously our focus is local so I am showing the corners in question and points surrounding. But the resource is quite amazing. Streetcorners you never thought anyone noticed are all mapped out. Crosswalks that don’t exist but could are included as well. Beyond that you can click any dot and get all sorts of details about that exact curb ramp. Thorough is an understatement. 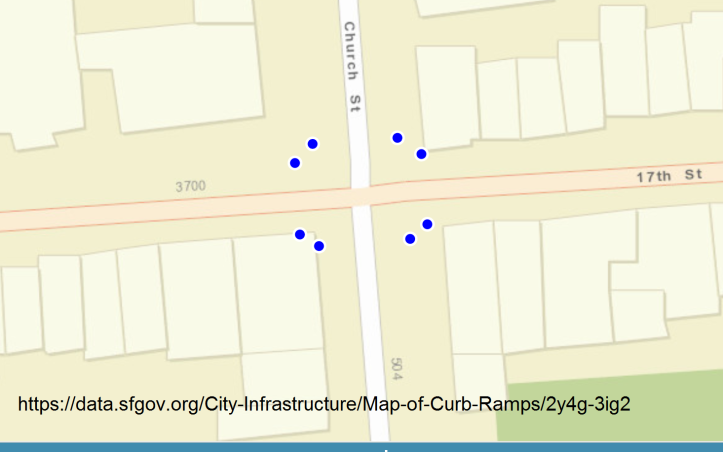 So, with 46,498 potential locations for curb ramps how does The City decide who goes first?

There has to be a framework for evaluation and there is. Not only that but as far as I can tell these projects should rate pretty high on the triage schedule. Let’s look at the chart the Mayor’s Office provides in the City & County ADA Transition Plan for Curb Ramps and Sidewalks from 2008.

The other question that one might ask concerns the costs of installation and related expenditures associated with curb ramps. For that info I suggest a quick perusal of this Prop. K funding requisition request that breaks some of those costs down very clearly and with great authority.

Curb ramps aren’t just a good idea, they are the law:

This whole explanation was so thorough that I just lifted it in tact from the San Francisco ADA Transition Plan document.